Date: 27 December 2009
Who Hiked: Me, Hubby, Things 1 and 2
Route: Emerald Bay to Parson's Landing and back
Estimated Distance: 2.4 miles
Weather: cool, cloudy
A few days after Christmas, when the Things' complaints about the newly-received Wii (when can we play? why won't this work? I can't do this!) had resulted in maximal levels of irritation in both parental units, we packed them into the truck and headed off to the west end of the island.
The West End Road is a trip in and of itself: barely 1.5 cars wide and full of hairpin turns, one edge butts against the rocky face of the island, the other edge drops to the ocean below. When you meet another vehicle on the road, you have either wait at a place that is wide enough for the other car to pass or you back up to a place that is wide enough for the two cars to pass. The alternative to patience and cooperation is scraped paint (if you get to close to the island side of the road) or a tumble into the ocean (if you get too close to the seaward edge). Meeting the Catalina Flying Boat panel truck is particularly terrifying.
Given that this was a Sunday, we had no vehicular traffic, though we ran into a few bikers, hikers, and runners. But no worries there -- plenty of room for a car and single-file people on the road!
We parked at the bar gate that blocks the West End Road just beyond Emerald Bay, where there is a large Boy Scout Camp and an environmental education facility called Mountain Sea Adventures. 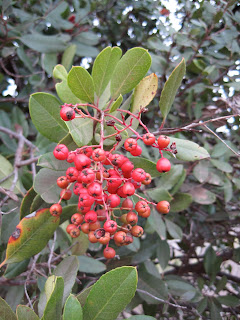 We then hiked the length of the road beyond the gate to Parson's Landing, a popular camping locale.
The road is more or less flat and is bordered by lemonadeberry and toyon bushes. The lemonadeberry bushes were just setting fruit and the toyon bushes were thick with red berries. And they were all chock full of yellow-rumped warblers.
A trail branches away from the road and provides a shortcut to the beach, so we took this trail. It was surrounded on all sides by fennel, an invasive introduced plant on the island. 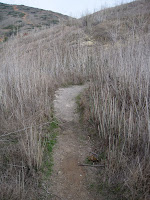 I have included a photograph -- all the gray stalks sticking up are fennel plants. In less than a half-mile, we were at Parson's Landing.
We were the only people on the beach this day, not a surprise given the gray weather.
The waves didn't seem too bad and Thing 1 was having fun running out to large rocks when the waves were out and then standing there as the waves swirled in and surrounded his rock. Thing 2 was a bit more timid about joining him, but finally worked up the nerve and ran out to the rock fortress too. Getting braver, Thing 1 ran out to a farther rock, but just then a large swell came onshore and the waves were bigger than he'd expected. Both Things dashed from their rocks to the safety of higher ground... The waves produced by these larger swells were infrequent (about 15 minute intervals), but impressive. 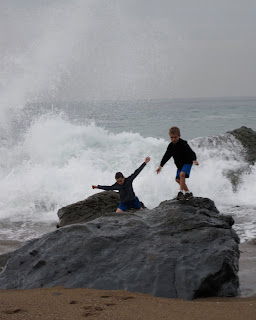 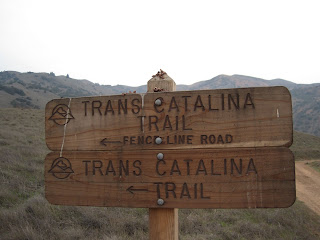 We walked along the beach and then hiked back along another road. This intersected the Trans-Catalina Trail at a couple of locations. At this point on the trail, we were only about 6.5 miles from the trailhead at Starlight Beach. An industrious fox had climbed to the top of one trail sign to mark its territory.
We hiked back to the truck along the road and then braved the West End Road home... and the boys talked about playing Wii for most of the trip.
Other birds seen/heard: Catalina quail, Northern ravens, Northern mockingbirds, House finches 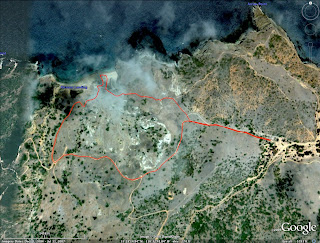 Welcome to my hiking blog!

Ever wondered where to hike on Catalina?
I moved to Catalina Island in 2007 with my husband (Hubby) and two sons (Things 1 and 2). We have had a great time exploring Catalina on foot and I hope that this blog helps you in your hiking efforts!